Last month a group of us from the Institute of Cosmology and Gravitation (ICG) went to the Bestival music festival on the Isle of Wight with some hands-on astronomy activities for the Science Tent. I’ve been a fan of public engagement at music festivals for a while now, and although I helped out at the first two Live from Jodrell Bank events, this was the first full-on music festival that I’d done.

Nearly all of the public events that we do are for audiences that have already made the decision to come along and find out more about astronomy so we decided we needed something different for Bestival, where I doubt visiting the Science Tent was at the top of anyone’s list of priorities! After brainstorming with David (our PhD student outreach rep) for a few hours we came up with the idea of ‘Scale Your Cosmos Right’, a twist on the classic TV gameshow ‘Play Your Cards Right‘.

The game is pretty simple. Six cards are set out face down. The first two are then turned over:

The player has to decide which of the two cards shows the larger object and (potentially) switch the cards around so that the smaller object is on the left. In this example the Earth and Sun have to be swapped because the Earth is smaller than the Sun:

The player then turns over the next card and has to figure out where it fits in compared to the other two cards that have already been revealed. In this example the next card shows the Moon so this has to be moved to the far left and the other cards shifted to the right:

We chose 12 different images to print on our cards, from the Moon to the SDSS map of nearby galaxies, and randomly selected six cards each time. The game seemed to go down well with the Bestival attendees and over 1200 people played Scale Your Cosmos Right over the four days we were there! You can see some pictures of us in action on our facebook page.

Anyone who has seen me give a public talk or run an outreach session will know that I really like talking about the scale of the Universe. So many people don’t realise how small we are compared to other planets, stars and galaxies and how far apart everything is. You’ll often find me demonstrating the distance between the Earth and the Moon with a basketball and tennis ball (thanks Tim O’Brien for first showing me that!) and I’m looking forward to adding in Scale Your Cosmos Right to my list of activities and trying it out with different audiences.

P.S. The plan is to eventually “release” Scale Your Cosmos Right as a pdf with the cards, instructions on how to play and information about the different objects. I’m hoping to get that done in November 2013 after World Space Week at Intech and the minor distraction of getting married!

I’ve been pretty completely quiet on the blog front for the last year. A lot has happened – I submitted my thesis in June 2012, passed my viva in August and graduated in December. In July last year I started work as the Outreach Officer for the Institute of Cosmology and Gravitation at the University of Portsmouth and am currently spending all my free time trying to decide how much astronomy and physics I can incorporate into my wedding later this year! Still, I’ve got a few new projects in the pipeline that should hopefully mean I’ll start blogging a bit more again.

The reason for this post is really just to have somewhere to post some pictures of a new tool that is now available for Galaxy Zoo users. The Navigator tool allows users to classify galaxies in a group and then investigate their classifications in more detail. 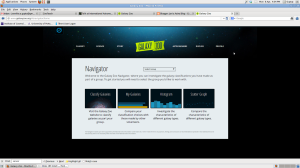 The above picture shows the home page of the Navigator tool. It’s pretty obvious from this picture what you can do with it! I quite like being able to compare my classifications with other people (see below), although as far as I can see it only shows your 12 most recent classifications and doesn’t go beyond your answer to the first question.

The most exciting part of Navigator for me is the ability to easily investigate your galaxies in more detail. There is the option to plot a histogram or a scatter graph and there are five parameters you can play with: redshift, colour, apparent brightness, absolute radius and absolute brightness. You then choose smooth or feature/disk galaxies, a small, medium or large sample size and whether you want to use your galaxies or a random selection of galaxies from Galaxy Zoo. You can also download the data if you want to make your own graphs. There are a few screenshots below showing examples of the different kinds of plots you can create but if you’re interested then I would recommend spending a bit of time on the Navigator yourself to get a feel for it. I personally think the Navigator is going to be really useful for schools outreach and I’m looking forward to trying it out with a group of students in a few weeks.

Just over a week ago I took part in Bright Club: Stars at the Bloomsbury Theatre in London. The audio of my set was recorded but it wouldn’t really work without my slides so I’ve thrown a quick video together, using a photo taken by my friend Paul Woods for the bits where there were no slides. You can see it below, screw ups and all.

I have to say thank you to Steve Cross and everyone at Bright Club London for letting me pretend I was one of the UCL cool cats for the night. You should all check out my partners in crime (Lucie Green, Jason Dittmer, Sarah Dhanjal, Sheila Kanani, Nick Canty, Martin Austwick and James Kneale) who were all fantastic and didn’t make me feel like an imposter! The professional comedians were of course all brilliant, especially the marvelous Helen Keen of Spacetacular fame. Finally, I have to thank Amanda Bauer aka @astropixie
for first drawing my attention to the wonderful M87 radio image through her dirty space news blog post.

The first event is the Big Bright Club Manchester which is taking place at the Deaf Institute on October 27. For those of you who don’t know about Bright Club, it is the “thinking person’s variety club” or “where funny meets brains”. Basically I’m going to try to make my research funny along with my good friend Mark and a bunch of other lovely people from previous Bright Clubs. It should be fun although I’m slightly nervous because for the first time, a Bright Club Manchester audience might be mostly drunk!

The second event is Spacetacular!, which is part of Out of this world: A spacetacular Manchester adventure. It’s the night after Bright Club (October 28) and it’s at the Museum of Science and Industry. This one’s going to be a little bit different and I’m going to embrace my geekiness and talk about Star Wars. I may or may not turn up in costume!

There’s lots of other good stuff going on which is a shame for me because it probably means I won’t get much thesis work done! Astro-wise there’s Rocket Week at Jodrell Bank, Amazing Astronomy at MOSI on October 28, Science Spectacular at the Whitworth Hall on October 29 and you can even help to stitch the solar system. Other events I know I’m going to are Your Days Are Numbered: The maths of death and the recording of The Infinite Monkey Cage (thanks Reesiepie). Phew, that sounds like a lot. See you there!

10 days ago I was at my Aunt’s house in Shillong trying to get some sleep before my first ever astronomy talk at a school. Shillong is the state capital of Meghalaya in north-east India, located some 5000 feet above sea level. The city itself is chaotic and overcrowded, with houses springing up anywhere they can be squeezed in and traffic jams like you’ve never seen. Leave the city though, and you can see some spectacular sights. My highlights include bridges made from living tree roots (as seen recently on the BBC’s Human Planet rivers episode), rhinos and tigers in the Kaziranga National Park and breathtaking waterfalls in the wettest place on Earth. However this is a blog about astronomy, and therefore is not the place for me to be sharing my holiday snaps!

This holiday was planned and booked around the time that I signed up to be a STEMNET School’s Ambassador and, full of new-found confidence, I mentioned to my Mum in passing that it might be nice to go into one of the schools while we were in Shillong to talk a bit about astronomy. I soon realised that this was probably a foolish idea, given that I was yet to even give a talk at a school in the UK. However by then it was too late – my Aunt had enlisted the help of a teacher friend and organised for me to go into their old school, St Mary’s, to talk to a group of 14 – 16 year olds. As is usually the case with me when faced with a daunting task, I then proceeded to pretend it wasn’t happening, somehow assuming that my talk would write itself! And so I found myself, in the last hour before we left for the airport, frantically saving any and all pictures I thought I might need from the internet, and trying to get Chromoscope to work on my laptop, with the intention to write the talk on the flight.

Needless to say, that plan failed and, to cut a long story short, I only finished the slides the night before the talk. The next day, armed with my laptop and a cheerleading team consisting of Mum, Aunt and sister, I found myself in the auditorium in front of 160 schoolgirls, being introduced by the school’s Vice-Principal. A little different from my assumption that I would be in a classroom with maybe 50 students! I then spent the next half an hour telling them as much as I could about the Invisible (multiwavelength) Universe, finishing with a bit about the Square Kilometre Array, trying to inspire them by explaining how they could be be the PhD students and post-docs working on the project by the time it’s (hopefully) completed in 2024.

After the talk, as to be expected, there were a lot of questions. I got the usuals about 2012 and the demotion of Pluto, but there were some other great ones such as why do galaxies have supermassive black holes in their centres and what would happen to life on planets when their star dies. The questions kept coming until the girls had to go to their next class but I could have stayed there all day. My feelings were echoed by one of the science teachers who fed my ego by saying she could have listened to me all day! The obligatory cup of tea followed (I really should learn to like the stuff!) and I left the school with the biggest grin on my face.

Overall I think it went pretty well. Yes I could have been more prepared. Yes I could have spent more time making my slides looking pretty (and getting Chromoscope to work instead of having to show screen shots). I probably could have spoken slower and refined some of my explanations (I’m not sure that spinning round with my arms out to illustrate a pulsar was the best idea) but I hope that my enthusiasm and love for astrophysics shone through and at least one of the girls looked up at the sky that night and understood a little bit more about our Universe.

Oh, and did I mention we saw a tiger?