When I did my first Bright Club talk at BCM4 in December 2010, I introduced myself as an astronomer and then showed a few examples of astronomers in movies to get a feel for what people might expect from me. This is a quick post that I’ve put together mainly so that I can easily find this information again! I should probably warn that this post may contains spoilers if you haven’t seen these films. 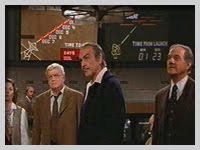 I watched the 1970s masterpiece that is Meteor following a “recommendation” by a Jodcast listener who said that Jodrell Bank fail to save the day and described Sean Connery’s character as a “brooding anti-war astrophysicist hero” or words to that effect. From what I remember, Dr Paul Bradley is brought in by the US government to save the day when they discover a huge meteor heading our way! I won’t go into all the things the film got wrong but basically Dr Bradley single-handedly unites the Americans and Russians so they can all aim their nukes at the meteor and blast it into oblivion! Oh, and he has an awesome moustache.

Update (10 October 2011) – I finally watched Contact. I just can’t get over the headphones!

I actually quite enjoyed Sunshine in the moments when I managed to forget that I knew any physics! Cillian Murphy plays Robert Capa, an (astro)physicist turned astronaut (apparently modelled on Professor Brian Cox) who is part of a team sent to chuck a massive bomb into the Sun to restart it. Now I’m not sure how many physicists get to become astronauts (I count one out of the 14 ESA astronauts) but I do like the idea that the physicist saves the day.

This is a new one since my Bright Club talk. In Thor, Natalie Portman plays Jane Foster who has morphed into an astrophysicist (in the comics Jane was a nurse). I’m sure she was meant to be a positive role model for girls and all that but all I remember is that she got into strops and fell in love with a Norse God. Not quite my life plan…